An overview of CPU Speeds, which provides for the selection of virtual CPU (vCPU) classes with different characteristics.

If the infrastructure in a given User-Manageable Cluster or MCP 2.0 Data Center offers the ability to deploy vCPU with different performance characteristics, the CloudControl software will allow you to decide which vCPU class a given Cloud Server should utilize. CPU Speeds allow the user to select an appropriate level of performance based on the intended function of the Cloud Server. For example, Cloud Servers may be running applications that are very CPU-dependent and need more consistent CPU performance. The performance characteristic associated with the CPU "Speed" applies to all vCPU on a given Cloud Server.

CPU Speeds that may be available in a given User-Manageable Cluster or Data Center include the following:

The  CPU Speed associated with each Server is visible in the Server information area: 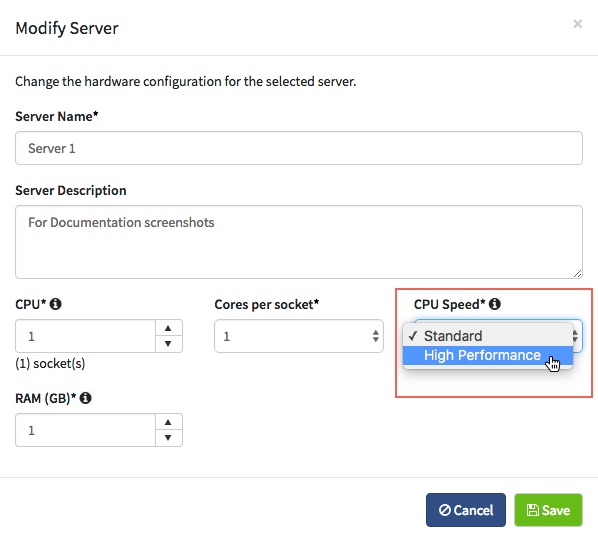 Availability and Use of Different CPU Speeds

It is possible, although unusual, for a CPU Speed to exist, but not currently be available for use. If such a condition exists, the fact that the speed isn't currently available and the reason will be displayed in the same dialog.

How to Use CPU Speeds

There are two ways to set the CPU Speed for a Cloud Server:

As always, these functions are also available programmatically as described in the API documentation at API 2

Each unique CPU Speed will be charged at its own rate for the pricing element. Refer to your Cloud product pricing page for more information.

From a reporting perspective, the system will now provide separate reporting for each CPU Speed that's available within a Geographic Region. This impacts the reports as follows: