Which deployment process is used depends on whether the Image (Customer or OS) is a standard image (meaning it will use the Guest OS Customization process) or a Non-Guest OS Customization (NGOC) image. For Customer Images, the type of Image is dictated by the decision made when you created the Customer Image through cloning as described in How to Clone a Cloud Server to Create a Client Image or when you imported the image as described in How to Import an OVF Package as a Client Image. Once an image is created, all Cloud Servers will use the deployment process dictated by the Image. In the Updated UI, you can identify a Non-Guest OS Image by the presence of a "plug"

in the upper left-hand corner of the image: 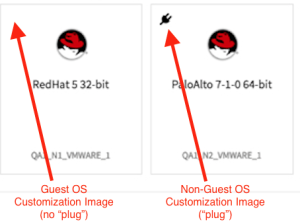 In either case, the provisioning process for a virtual machine is a multi-step procedure that takes place asynchronously. After you make a deployment request through the UI or API, the system provides updates as the Server makes its way through the provisioning process. Each deployment passes through a maximum of eleven steps as the Cloud software interfaces with VMware vCenter, the heart of the VMware virtualization platform. The specific steps are described in the two sections below.  In each case, the step name returned on the API, what is displayed in the Admin UI, and the meaning of the step is given.

When the Data Center location's vCenter accepts the clone request, it places it into its own internal queue. Virtual Center executes these tasks in parallel and on a first come/first served basis. If there are a large number of tasks in the queue, Virtual Center will dynamically scale the number of simultaneously executing tasks according to available memory and CPU. The time it takes for a clone virtual machine task to complete is dependent upon the size of the disks attached to the source image - the more disk space the source has, the longer it takes to make a physical copy on the back-end media. Another factor that can impact step one is the amount of disk I/O on the source and destination datastores. Virtual disks are fully provisioned on the datastores (if the VM has a 50 GB disk, then a 50 GB disk image is created, not some smaller image that is grown to fill the 50 GB as data is written.) It is also worth noting that there may be multiple SAN devices involved. If the source and destination VMs are using the same SAN device, then cloning will be faster as all the reads and writes take place within the same device. When the source and destination are located in different SANs, then the data must traverse the SAN fabric.

Best Practices for Both Deployment Types

In order to ensure the efficient and successful server deployments, ensure your deployments meet the following best practices:

The Guest O/S Customization process involves changes within the operating system. After the physical copy is complete, the hypervisor boots the new virtual machine. During the boot process, VMware Tools loads and begins the customization process. For Linux (Redhat, CentOS and Ubuntu) this involves setting the IP address, gateway, network & broadcast addresses, and, if deploying from an OS image, setting the root password and registering Redhat systems with RHN. For Windows, this involves running the Microsoft tool 'sysprep.' Sysprep is responsible for setting the network parameters, much like with Linux systems, setting the Administrator password and licensing the system with Microsoft. The sysprep process requires rebooting the system once or twice, depending on which version of Windows is being deployed. In either case, the Guest O/S process can be slowed down by 3rd party software that runs before VMware Tools loads and customizes the system. Products like antivirus software, firewalls, auto-logon programs, databases, application servers, etc. can hinder the process if they are CPU intensive or block the boot process. Some products may even cause the customization procedure to fail entirely.

The specific deployment steps associated with deployment from a Guest OS Customization Image are:

For a step by step deployment guide please see: How to Deploy a Cloud Server from a Guest OS Customization Image.

The Non-Guest O/S Customization (NGOC) process literally clones the Image and connects it's NICs to the requested VLANs. Unlike Guest OS Images, NGOC images can have multiple NICs. Since you are making an exact clone of the server, you must specify a VLAN for each NIC on the source NGOC Image. However, none of the NICs are configured within the Guest OS by the deployment process - so although the virtual hardware configuration may have changed, the configuration inside the OS will remain identical to the state of the original image.

The specific deployment steps associated with deployment from a Non-Guest OS Customization Image are:

For a step-by-step deployment guide, please see: How to Deploy a Cloud Server from a Non-Guest OS Customization Image.